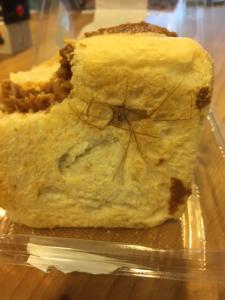 A car salesman from Cheshire got more than he bargained for when he bought a pulled pork sandwich for lunch as he discovered a spider inside the bread.

Chris Eastwood, who works as at Lexus Bolton, had purchased his lunch from Greenhalgh’s bakery in Bury Road, near the dealership. However, he was just one hearty bite into the sandwich when he spotted something strange lurking within the bread – a closer inspection revealed that it was a spider that Mr Eastwood, should he have taken one more mouthful, would have taken a large chunk out of.

No one likes a nasty surprise at work, least of all ones that involve arachnids. However, unwanted shocks are inevitable for any business and luckily for car dealers they can obtain a road risks insurance or motor trade insurance policy, which provides valuable cover for against road accidents as well as malicious or accidental damage and theft on the premises.

According to the Daily Mail, all Mr Eastwood received from the bakery in way of compensation was £5 worth of vouchers, which considering that the sandwich had cost £2.99, amounted to a refund and £2.01 as an apology.

The 29-year-old explained: "I was just enjoying my sandwich and happened to turn it round and noticed that a spider had actually been baked into it.

"I was disgusted and it made me sick instantly after… Spiders are the one thing that I'm terrified of. I don't think I'll ever touch a pre-packed sandwich again, or go to Greenhalgh's."