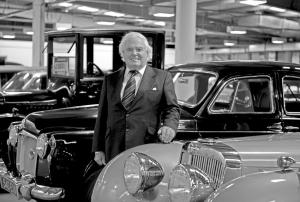 Sir Arnold Clark, the UK’s first billionaire car dealer who started his company by buying a Morris Ten Four with demob cash, has died at the age of 89.

In a statement Sir Arnold’s family said he has passed away peacefully yesterday morning, 10 April 2017.

They said he was a “beloved husband, father, grandfather and a great friend and employer to many”.

After leaving the Royal Air Force in the early 1950s, the businessman used his demob money to buy a Morris Ten Four for £70. After restoring the car he sold it on for a profit and then started to buy and sell more cars, opening the first Arnold Clark showroom on Glasgow’s Park Road in 1954.

A statement from Sir Arnold’s family said: “Sir Arnold Clark passed away peacefully this morning, 10 April 2017, surrounded by his family. He was a beloved husband, father, grandfather and a great friend and employer to many.

“He was an inspiration and the family will continue to carry on his vision.

“He will be greatly missed.

“We wish to thank all those who have sent messages of condolence and appreciate your kind support.
“We ask for privacy at this difficult time to allow the family to grieve.”

A statement from Arnold Clark Automobiles read: “Sir Arnold was a beloved husband, father, grandfather and a great friend and employer to many.

“A truly inspirational business leader, Sir Arnold’s work ethic and strong family values will continue to inspire all those who work for the group. Our thoughts are with his family at this difficult time.”

Sir Arnold, who was awarded the Lifetime Achievement Award at the Car Dealer Used Car Awards in 2015, opened his first site in England with a retail operation in Liverpool in 1994.

The company celebrated its 60th birthday in 2004.