The Motor Trade and Brexit – Impact on the Automotive Industry 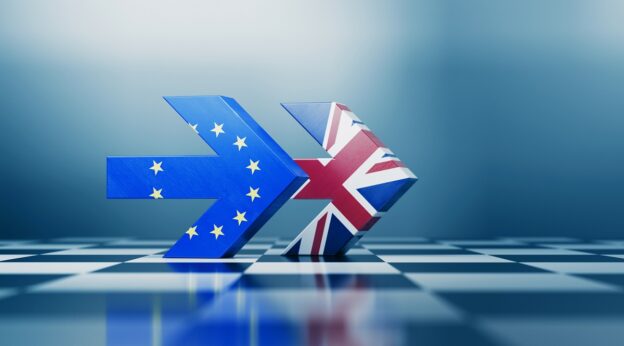 Coronavirus has shaken up the whole world so dramatically that many of us have almost forgotten about Brexit. Yet, ever since the referendum in 2016, the motor trade has been anxiously hoping for a deal to be struck with the EU.

54% of all vehicles manufactured in the UK are exported to the EU, so the multi-billion pound industry stands to lose out if tariffs are imposed. Without a trade deal, manufacturers including Ford, Peugeot, Mercedes-Benz and Vauxhall have all warned that they will need to increase new car prices.

All of this has had a knock-on effect on the used car business, with demand down and prices falling. What will be the impact for most motor traders? Will there be supply issues? Are car plants closing? Will we have to pay higher prices for vehicles in future?

How Brexit has already impacted the motor industry

The years since the Brexit vote have seen UK new car sales stagnating. The whole industry is waiting to see the outcome of talks between the UK and EU, but some significant impacts have already taken place:

No deal Brexit: the impact on car production and the motor industry

Over an extended period, the UK motor industry has relied on the free flow of parts, vehicles and people within the EU. Iconic brands have only survived because of the involvement of EU carmakers – think BMW and the MINI, for example.

A no deal Brexit could be extremely damaging to this trade in many ways:

Even before a no deal Brexit has happened, we have seen how currency swings and lower investment from manufacturers can impact car prices. As additional issues arise, cars could become unaffordable for some people.

Could car manufacturers pull out of the UK?

While car marques still want to sell their vehicles in the UK, they are less likely to be produced here, with plant closures mooted.

Honda have already stated they will be closing their Swindon plant in 2021, with 3,500 jobs on the line. However, that may not be all down to Brexit – Honda has seen a decline in sales across Europe in recent years.

In 2020, Ford closed its Bridgend site in Wales, adding to the job losses in the sector, as its contract with Jaguar Land Rover ended.

Against this backdrop, Nissan decided to stop building the X-Trail in Sunderland, and there are industry rumours that other car factories could close or scale back production, including:

While Brexit is not specifically mentioned by manufacturers when plants close, it has an impact on production, sales and forward planning. Manufacturers see Europe as a key market and will want to ensure the costs of building and transporting cars are kept to a minimum. Many industry observers are concerned that there will be UK job losses in car manufacturing.

Will car prices will rise or not? Much depends on whether a deal can be struck.

Manufacturers differ on whether any increased costs (in the form of tariffs) will be passed on to their customers directly after 31st December 2020. BMW, MINI and Jaguar Land Rover have promised not to pass on tariffs for vehicles already on order. However, PSA Group (the parent company of Citroen, DS, Peugeot and Vauxhall) have said they will pass tariffs onto customers from the start.

For motor traders, the rise in prices could put people off purchasing a new vehicle right now. In all cases, it is worth keeping a close eye on the situation with the EU, as any price rises will undoubtedly have a knock-on effect on second-hand prices. There could be further demand in this market, which has already seen increased prices due to high demand during the coronavirus pandemic.

In the event of a no deal Brexit, 10%tariffs will be imposed on new cars imported from and exported to the EU.

However, even if a deal is struck, additional costs and time delays are still likely in transporting vehicles to and from the EU, with increased customs checks in place. It has been estimated by the SMMT that costs of planning ahead alone amount to £500m.

Used cars are not subject to tariffs as they have already been built – good news for second-hand car dealers.

Will my motor trade business be successful after Brexit?

There are reasons to be positive for motor traders:

Unfortunately, as of mid-December 2020, there remains uncertainty about how the industry will operate in the post-Brexit era. This has been compounded by the coronavirus pandemic.

However, the motor trade has always been resilient, and there is no reason to think the industry will implode. It makes sense for the UK and EU to work closely together in future, to protect jobs and access to new cars across the whole continent. Even if Britain leaves the EU without a deal, a deal can be negotiated afterwards.

What are the best cars to buy and sell after Brexit?

This is a tricky question to answer, given the uncertainty. We don’t know whether there will be a deal between the UK and EU or not.

Our advice is to keep an eye on any price increases and their impact on new car sales. There will always be popular vehicles such as the Ford Fiesta and Focus, BMW 3-series or Vauxhall Corsa that should continue to sell well, even if costs increase. However, if some models escape higher tariffs, they may increase in popularity if the list price remains lower than their rivals. Models imported to the UK from Japan might bypass EU tariffs, for example – although there will be increased transportation costs if the likes of Honda and Nissan do not transport the vehicles through the EU.

Watch this space! We will review the most popular vehicles over the months ahead, to help provide a longer-term view for motor traders.